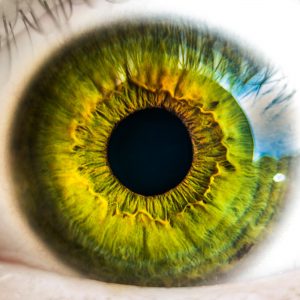 The eye is a spherical structure about an inch in diameter. It has a clear bulge on the front side, which is called the cornea. The wall of the eye beyond the cornea consists of three tissue layers. The outermost layer is the sclera, a tough, protective coating that covers most of the outer surface of the eye that connects to the transparent cornea at the front of the eye. The middle layer is the choroid, a vascular layer that is continuous with the ciliary body and the iris on the front side of the eye. The inner layer is the retina, a light-sensitive tissue that lines the inside back wall of the eye.
To understand how the eye works, it is useful to think of a camera. The human eye is more complex than a television camera, but the principles are similar. When light rays are reflected from an object, they enter the eye through the cornea, which works to focus the light passing through to the back of the eye and onto the light-sensitive cells in the retina.
When the eye has no refractive errors and can pass light onto the retina to create a clear, crisp image, this is referred to as emmetropia. However, there are many common eye conditions that can cause the eyes to focus light imperfectly, causing vision to be blurred.