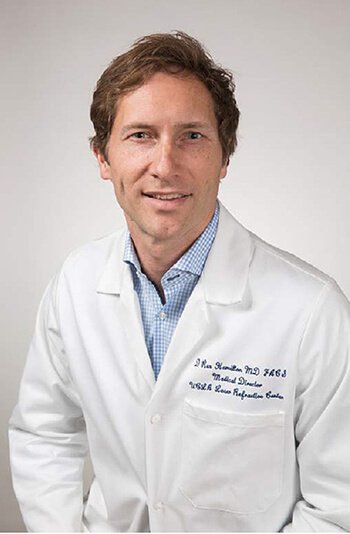 D. Rex Hamilton, MD, is known throughout the United States and internationally as a leader in laser vision correction and premium cataract surgery. As noted above, he pioneered many new surgical techniques during his 15 years as Professor and Director of the UCLA Laser Refractive Center at the Stein Eye Institute in Los Angeles.

Dr. Hamilton was valedictorian of his high school class. After graduating Phi Beta Kappa and Summa Cum Laude from Dartmouth College with an undergraduate degree in physics and mathematics, Dr. Hamilton earned a Master of Science degree in biomedical engineering at the School of Engineering and Applied Science at the University of Virginia. After working for several years in marketing and product planning for MRI systems at Siemens Medical Systems, Dr. Hamilton decided to pursue a career in medicine. He continued his education at the University of California, Irvine, where he earned a Doctor of Medicine degree and received numerous academic awards and scholarships, culminating in his graduating at the top of his class. He began performing cataract, corneal transplantation, and refractive surgery during his residency training at the UCLA Stein Eye Institute. Following the completion of his residency, Dr. Hamilton spent an additional year of training as a fellow in refractive, cornea, anterior segment, cataract and glaucoma surgery at Minnesota Eye Consultants under the directorship of Dr. Richard Lindstrom, uniformly recognized as one of the founding fathers of modern cataract and refractive surgery. He then returned to the Stein Eye Institute, where he became the Medical Director of the UCLA Laser Refractive Center. During his 15 years on the faculty at the Stein Eye Institute, Dr. Hamilton trained over 100 residents and fellows from the United States and countries throughout the world on the art and science of premium cataract and refractive surgery.
With his highly technical background, Dr. Hamilton is a true physician-scientist. During his many years conducting clinical research, Dr. Hamilton has become well known in the academic community for his expertise in the areas of premium intraocular lenses (toric, multifocal and extended depth of focus) for cataract surgery, corneal biomechanics, and corneal imaging. He has authored 40 peer-reviewed journal articles and book chapters, given more than 50 scientific presentations at national meetings and has delivered more than 150 invited lectures across the country and internationally. He has served on the American Academy of Ophthalmology’s Preferred Practice Pattern Committee for Refractive Surgery, a publication that sets the standard of care for refractive surgery in the United States. He currently serves on the Refractive/Cataract Clinical Subcommittee for the American Society of Cataract and Refractive Surgery. Since 2013, Dr. Hamilton and his colleagues on the Committee have published four articles teaching the finer points of new and emerging technologies for cataract and refractive surgery.
Dr. Hamilton looks forward to meeting you, evaluating your eye health and discussing a customized treatment plan that will offer you the best chance of meeting your individual visual needs.