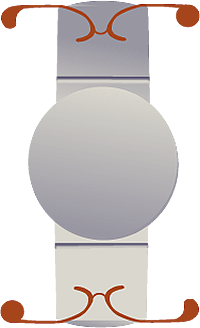 Having to frequently take reading glasses on and off is inconvenient for many people. Because of this, a person might wear reading glasses around their neck, scatter multiple pairs around the house or wear bifocals all the time. With today’s advanced lens procedures, patients now have a choice in the type of lens that is implanted during cataract or clear lens extraction surgery. Unlike conventional “single vision” intraocular lenses (IOLs), accommodating IOLs are lens implants that are designed to help patients see at varying distances using different points of focus. The goal of an accommodating IOL is to provide functional vision at different distances to minimize the use of glasses. Although they might still prefer to wear glasses for prolonged reading, the vast majority of accommodating IOL patients experience freedom from glasses for tasks such as driving, watching TV, using their cell phone and computer, looking at photos, reading magazines, price tags, product labels, receipts, and menus.

How Does an Accommodating IOL Work?

The Accommodative IOL (intraocular lens implant) is designed to mimic the movement of the natural crystalline lens of the eye. When we are younger, the natural lens is very flexible and easily moves back and forth within the eye as we change our visual focus from up close to distance objects. As we age however, most commonly in our early to mid 40s, the eye loses its flexibility and can no longer easily accommodate those changes in our focus. To imitate the action of the young natural lens, the accommodating IOLs are able to move and/or change shape inside the eye to allow focus at multiple distances. While current technology accommodating IOLs are able to provide some range of focus, they cannot replicate the amazing range of vision you had when you were 20 years old.
View Video

Are There Side Effects?

There are risks and potential side effects to any surgical procedure, including a surgery as common as cataract surgery.
The most common issue is that an artificial lens can develop a”film” on its back surface that clouds the vision. Patients who have had cataract surgery may believe that the cataract has started to recur. This cloudiness, called a”posterior capsular opacity”, can usually be easily treated using a 5 minute laser procedure called a YAG Capsulotomy which breaks up the film behind the implant, restoring vision back to its original post-surgery status.

Will I Need Additional Procedures to Achieve the Best Result?

Like a multifocal IOL, the accommodating IOL is implanted inside the eye and requires your surgeon to calculate and choose the optimal implant power prior to surgery. Once it is implanted, it cannot be as easily exchanged as one could the power of glasses or contact lenses. An appropriate IOL power is estimated using advanced mathematical formulas based on pre-operative measurements of your eye’s dimensions. Although these formulas are quite accurate in most patients, there are individual variables that prevent this process from being 100% perfect. In particular, individuals who are extremely nearsighted, farsighted, or have high amounts of astigmatism, and patients who have had previous refractive surgery (e.g. RK, PRK, LASIK), are more likely to end up with an IOL power that is not optimal because the mathematical formulas are based on average sized eyes, not extremes or eyes that have had previous surgery.
Accommodating IOLs are high performance devices and, accordingly, require precisely tuned optics. If the IOL power is not optimal, this highly technical IOL will not perform as well as desired. In these situations, a patient may discover the vision is adequate for most tasks and that wearing a very thin pair of glasses helps them out in certain situations (e.g. night driving). Alternatively, an additional procedure, such as LASIK or PRK, can be performed to optimize the outcome. There is a 20 – 25% chance that a secondary procedure like LASIK will be necessary to fine tune the spectacle free vision when an accommodating IOL is implanted.
Please refer to the FAQs about Accommodating IOLs to learn more specifics.

The alternative to an accommodating lens would be a monofocal IOL or a multifocal IOL. A patient who chooses a monofocal (conventional single vision) IOL must be aware that glasses for near vision tasks will be necessary. To reduce dependence on glasses for near vision tasks, monovision correction with monofocal IOLs is also an option. Monovision correction is a technique that makes use of the fact we have two eyes. In this technique, one eye is set for distance vision while the other is set for near vision. After an adjustment period which usually lasts several weeks, the brain neuroadapts to this new optical arrangement, allowing the patient to see far and near seamlessly. This monovision arrangement is often used in patients who wear contact lenses full time and who are over the age of 45. Monovision may not be the best choice for all patients.